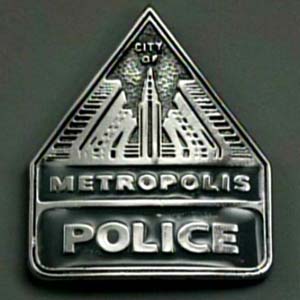 The finest law enforcement agency in the nation, the Metropolis police department has an outstanding arrest record - over 90 percent of all crimes reported result in arrest and subsequent prosecution. Another six percent of reported crimes are solved within two years.

The Metropolis police department also ranks highest in national satisfaction and popularity polls with citizens. It has earned high marks from all communities and groups with the city for its active community service and crime prevention programs. Among its numerous projects, the department sponsors several neighborhood watch programs, after-school activities for at-risk youths, drug awareness programs, crime prevention programs, and "town hall" meetings.

Unlike many law enforcement agencies across the country, Metropolis police officers report higher than average job satisfaction, an aspect of the department that has led to low attrition among the ranks. Many officers retire after 20 to 25 years with the department, and sergeants retiring with over 30 years of experience are not uncommon.

Currently, Metropolis has more than 43,680 uniformed officers with an extensive support staff spread among 118 precincts. Thanks in part to their diligence and the department's Resident Police Program, which encourages officers to live in the neighborhoods they patrol, crime in the city has been steadily declining for the past five years in all major categories, according to FBI national crime statistics.

Under the command and direction of the Police Commissioner, the Metropolis police department has remained at the cutting edge of law enforcement technology. It is currently the only city with over 85 percent of its patrol officers using nonlethal stopping devices, such as subsonic generators that produce disorientation and nausea, rubber bullets, "flash" rounds in their service revolvers and similar technologies.

The fire department has all manner of units, including engines, hook-and-ladder trucks, rescue units, and marine units. The fire department also maintains the city's Hazardous Materials (or HazMat) Response Team. This unit can contain and neutralize plasma, radiation, toxic chemicals, molten substances (including metal, glass, and rock), and level four biohazards for short periods of time.

The Metropolis fire department is housed in 240 firehouses throughout the 6 boroughs. This allows for a response time of under three minutes for most common emergencies and no longer than nine minutes for toxic spills, depending on the substance and location of the specific response team. If needed, all of Metropolis's fire abatement equipment and active personnel can be on the scene of a fire within 35 minutes.

If assistance is required, citizens can call 9-1-1 from any telephone or any Infohub kiosk located throughout the city.

A 9-1-1 call can be dialed from any telephone (including pay telephones), cellular phone, or communications hub throughout the city. Additionally, the Metropolis police department maintains call boxes on street corners and along public highways in "trouble spots" throughout the city. These call boxes are preprogrammed to contact a special, dedicated line at the Metropolis police department's communication center when the handset is picked up. The call boxes also alert visitors that they have ventured into a less desirable parts of the city.

As with all emergencies, please speak clearly and give all the information requested, including the address, nearest cross street, people involved, and whether anyone is injured. For fires, you should also state what materials are burning, if you know, and any special symbols or numbers on safety signs.

The average response time for genuine emergency calls placed by a call box or to 9-1-1 is one and one half minutes to three minutes, depending on the nature of the emergency. The maximum response time is five minutes, assuming no extraordinary circumstances or disasters.

Located in the West River midway between New Troy and Queensland Park is Stryker's Island Maximum Security Correctional Facility, one of the toughest prisons in the nation. While the original buildings on Stryker's date back to just after the Civil War, the island has been used to house Metropolis' reprobates for at least 200 years.

Original settlers to the region described the island now called Stryker's as a place even the natives avoided due to what they called the "soft-talkers" who lived in the shadows of the forests, whose touch could turn a man into a simpleton, unable to remember his name or recognize the face of his wife.

The first residents of Stryker's Island were debtors, placed on the island to work the small municipally held farmsteads there until they produced enough crops to pay off their debts. In the case of Jebediah Stanton, the punishment meant living the rest of his life on the island, eventually helping to construct the first buildings of what would one day become known as Stryker's House, a correctional facility for the city's criminals.

Since its founding, Stryker's has been home to tens of thousands of criminals, from the tamest (such as Edward Robinson, who broke into homes of single women to steal their shoes and had amassed over 20,000 pairs by the time he was caught) to the infamous (such as Deathstroke and other powerful beings) that are apprehended in Metropolis.

The prison, like many in United States, is continually overcrowded, often with four prisoners sharing a room designed for two men. As investigative reports by the Daily Planet and WGBS have shown, the effects of overcrowding are worst at mealtimes, with the so-called C shift of prisoners eating dinner at 10:00 P.M. because of crowded mess hall conditions. The city government has attempted to deal with the overcrowding issue at Stryker's, but its options are limited. It is reluctant to enforce mandatory release programs common in other cities, because of the risk these criminals pose to the general population.

Stryker's has 2,456 cells designed to hold two prisoners each. Reportedly (such records are held confidentially by wardens) the prison has 108 solitary confinement rooms buried in the island itself. The location of some of the solitary cells was revealed during an investigation following the cave in and drowning deaths of four solitary confinement prisoners four years ago.

Ferries leave for Stryker's every hour on the hour from the 14th Precinct Station, located at the end of Fairchild Street, in New Troy. Final ferries leave Stryker's at 8:30 P.M.

Like fairy tales told to children to make sure they behave, rumors regarding Stryker's have cropped up over the years. Most of them have been proven false by Roy Raymond Jr., host of a "Behind the Bars: Inside Stryker's Island" broadcast on WGBS last fall (1999). Some of the discounted rumors included:

* The existence of a tunnel burrowed under the West River to Queensland Park.
* A hangman's noose on public display in the mess hall.
* The bones of Jebediah Stanton lying on a bunk in cell 0001.
* Electrified bars on the cells of C shift prisoners.
* Occult symbols carved into the floor in the prison chapel.
* Superman's secret hideout underneath Stryker's Island

* Personal effects of Anthony Anicetti, the only man to ever escape Stryker's and live, are still being held in the prison stores - in anticipation of his capture and return. (If he is still alive, Anicetti is over 90 years old).
* A tunnel was dug between the walls of the prison from the fourth floor into the ground and towards the West River, only to come up in the guardhouse near the front gate.
* Stryker's gallows still stand in the prison exercise yard.

Raymond could not prove or disprove the appearance of shadowy men within the halls of A Block, nor the story that a "phantom block" of Stryker's - the F Block, which was destroyed by fire in 1932 - appears from time to time, and prisoners and guards who unknowingly walk into it have never been heard from again.

Along with its more traditional emergency services, Metropolis is also home to several specialized teams. Most notable among these is the New Troy Search and Rescue Company. This group, made entirely of volunteers, specializes in locating survivors and victims of disasters such as earthquakes, fires, floods, or tectonic shifts. NTS&R has seen duty as far away as Turkey, Mexico, and Taiwan, as well as California, North Dakota, and Coast City, among other locations, in response to natural, human-made, and other disasters.

The city also has an FBI office, a U.S. Marshall office, and numerous help lines for other problems and conditions, such as suicide prevention and rape.

More on the Metropolis Police Department

More on the Metropolis Fire Department