The Daily Planet & Other Media 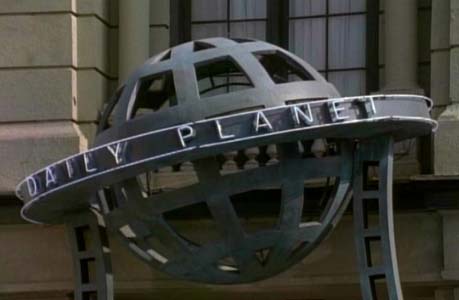 The periodical Our Planet was founded in January of 1775 by Joshua Merriweather, a visionary publisher and friend to Dr. Benjamin Franklin. Following the revolutionary war, Metropolis continued to grow, gaining more trappings of a truly cosmopolitan city. In 1783 the offices of Our Planet was burnt to the ground by Tory sympathizers in retaliation for Merriweather's pro-colonies stance. Merriweather's paper reopened January 1, 1793 under the name The Daily Planet with offices on the corner of Concord Lane and Fifth Street.

Merriweather's newspaper grew in pace with the city and the country. The reports from Lewis and Clark's expedition in the early 1800's were reprinted in the Daily Planet thanks to President Thomas Jefferson forwarding them on. The excitement and sense of discovery engendered by the coverage of the explorers quickly turned the Planet into the best-selling daily newspaper in the world - a status the paper has worked to maintain ever since.

Only one time in the history of the paper has it failed to print its scheduled editions: in 1994, the Daily Planet fell into financial difficulties and was purchased by Lex Luthor. Shortly after Luthor took possession, the building was bombed and the paper was shut down, ostensibly due to the costs of rebuilding an under-insured facility. Subsequent investigation showed that not only was the bombing was directly initiated by Luthor, the financial problems of the paper were directly orchestrated by Luthor. Following Luthor's dive to his death, the Daily Planet was purchased and reopened by Franklin W. Stern of Stern Media. It was later purchased by Leslie Luckabee (acting on behalf of Lex Luthor Jr.)

The Daily Planet has morning and afternoon editions7 and is the newspaper of record for Metropolis. It publishes several foreign language editions as well. Together with the rival Metropolis Star8, the papers reach an audience of over two million within the city limits. They are still seen by the majority of Metropolitans as their major source for news and information.

The remainder of the print news of Metropolis is covered by the Daily News, and the Metro Eagle - each with its own target audience and speaking for a specific portion of the population.

Metropolis also is home to the infamous National Whisper tabloid. This sensationalist rag gained notoriety for publishing the fabricated Lois Lane/Superman pictorial which showed Ms. Lane and Superman in an intimate setting at the exclusive Chateau Roberge. While the Whisper was exonerated from any blame, Dirt Digger Magazine paparazzi photographer Samantha and her boss Randy Goode were found guilty of fraud and conspiracy to commit murder and are still in prison.

Ask anyone in the nation what the three leading news magazines are, and the answer will always include Newstime, which is based in Metropolis. Winner of the Zenith Award for Excellence in Journalism for best news magazine from 1994 to 1997, Newstime has become a leading national periodical of popular opinion and thought, with editorials written by luminaries such as Lex Luthor, Alan Scott, and every president since Lyndon Johnson.

Published by Colin Thornton, Newstime is best known for its balance of conservative and liberal opinions. As such, the magazine and Thornton have sponsored presidential debates in every election since 1972. Traditionally, the debates are held at the University of Metropolis, with Thornton serving as moderator.

The city is also the home to Galaxy Publishing, which publishes numerous titles including Sports Scene, and Galagirl. Not to be outdone, LexPublishing offers readers almost two dozen different magazines ranging from high fashion (Couture) to computer technology (Bitstream, e-People).

Metropolis is home to over 45 radio stations, 25 AM, 20 FM and low power specialty stations10.

Metropolis's WMET went on the air in the late 1930s and quickly became the city's leading radio news source. Along with WMET's coverage of World War II, which won the station awards and admiration from those at home and overseas, WMET has been on the scene of virtually every major news story in the city. WMET is known throughout the city as the voice of Metropolis.

Metropolis's FM stations are recognized around the world for setting the tone of the modern music scene, as well as landing key interviews with some of music's most notorious recluses. Metropolis's best-known FM stations include: WCAR, WGBS FM, WJUR, WKSL, and WALT.

While most of the major networks have offices in the Metropolis area, the city is the home to WGBS, the homegrown success story that has gone on to become a global phenomenon.

Beginning as a simple local television station that served the needs of the community, WGBS, under the guidance of Morgan Edge, grew quickly, outstripping local network affiliates in the coverage of regional and national news.

Since coming into its own and being carried by over 80 percent of the country's cable systems, WGBS has become one of the leading independent television stations. It has bolstered its reputation through a commitment to provide at least 30 hours of original programming a week, from Perspectives, the award-winning interview series hosted by Catherine Grant, to Jumpin', a popular urban comedy airing on Thursday evenings. WGBS proudly aired the Uncle Oswald Show for 20 years, and it is currently home to the Whitty Banter Show.

One of Metropolis' most popular children's television programs is Captain Carrot and his Amazing Zoo Crew which has been on the air since 1982.9

Also serving Metropolis and the world is LNN (formerly LexTel), the LexCom News Network. This 24-hour cable and Internet news channel has offices in 24 countries around the world and video feed from over 1,500 independent videographers. By being both online and on the air, LNN can respond quicker than almost any other news channel.

In addition to WGBS and LNN, Metropolis is also home to WLEX, also owned by LexCom. While WLEX is only carried by just over half of the nation's cable systems, it has shown amazing growth in recent years. But despite its increasing national popularity, WLEX still has a questionable reputation in the eyes of many Metropolitans. While most trust the station's news implicitly, some claim that the station was never able provide fair and objective reporting where Lex Luthor was concerned.

Metropolis is also the home of Sun Broadcasting, owned and operated by the flamboyant Englishman Henry King, who recently gained fame when he descended to the bottom of the Marianas Trench in the Pacific Ocean. While it has not fared as well in the communication wars of the late twentieth century, Sun is still a player in the Metropolis media scene, offering an edgier brand of entertainment, talk show, and lifestyle shows.

With the advent of the Internet and the World Wide Web, Metropolis has led the charge to find new paradigms of news reporting and communication within its borders. The first fruits of this experimentation and exploration can be found at LexCom On-line, a 24-hour-a-day, seven-day-a-week Internet news service that accumulates and processes news from other sources around the world. Once gathered, the news is presented in a digest format, giving readers a comprehensive view of a particular topic.

Additionally, LexNet and Systely, two of the nation's largest ISPs, are headquartered in Metropolis.

Metropolis also has numerous startups moving communication forward at the speed of light, with viewers receiving the daily editions of electronic newspapers, personal news assistants communicating the news to users from a computer-generated image of a human head - not to mention advances in regular television and broadcasting. In Metropolis, tomorrow comes sooner than you think.

Pulitzer4: Established and financed by famed 19th century publisher Josef Pulitzer's will after his death in 1911, the Pultizer is the highest honor given to American journalists, writers, and musicians. The winner receives a gold medal and $7,500 ($10,000 beginning 2002). The process of selection entails 102 distingushed judges serving on 20 separate juries who are asked to choose the final three nominees for 21 categories. The short lists are generally announced in April while the awards are presented at a luncheon at the University of Metropolis School of Journalism in May.

Kerth5: The regional equivalent of the Pulitzers, the Kerth is awarded by the Press Club of Metropolis for outstanding journalism in the Northeast United States. Equivalent to the Katie Award in the Southwest, the National Press Club, L.A. Press Club and others, the Kerth is awarded in late May at a black-tie dinner. [Clark Kent was awarded his first Kerth in 1994 for 'Growing Old in Metropolis'. In all probability this story was also short-listed for a National Press Club Award for geriatric writing. Lois Lane won Kerths for Investigative Journalism in 1991, 1992, and 1993.]

Zenith Award for Excellence in Journalism6: Created by Lex Luthor, this award has been nicknamed 'the Baldy' by Metropolis journalists.

A Day at a Great Metropolitan Newspaper

Superman: The Ultimate Guide To The Man Of Steel (hardcover) by Scott Beatty (author)