What do we know about the planet Krypton? - In the Lois & Clark Universe almost nothing.

We know its sun was red. We know the inhabitants had forewarning of the impending destruction of their world. We know some of them were able to get to safety on a colony described as harsh and barren. 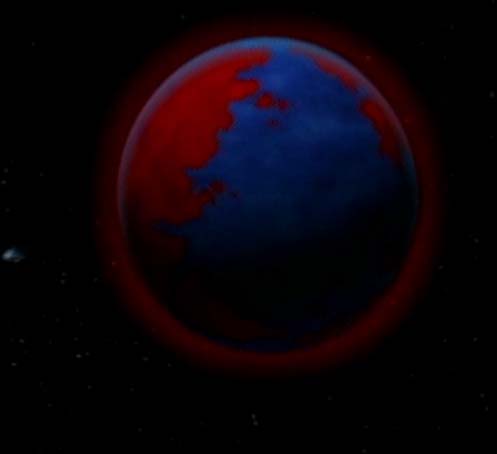 Krypton immediately prior to its destruction. 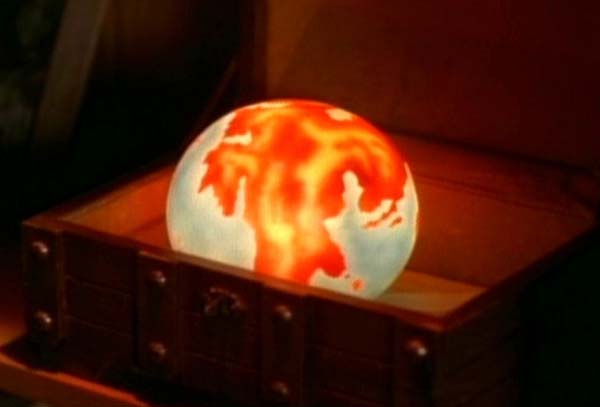 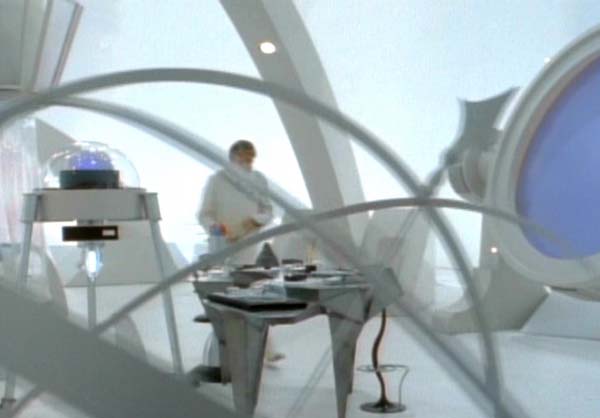 Other things we know: Kryptonians have a denser than Earth normal molecular structure and the assassin Tez (Big Girls Don't Fly the script) said the Kryptonians on New Krypton were 'weak'. And Kryptonians exposed to the radiation of Earth's yellow sun develop super powers.

Light on the surface of the planet would resemble that of an incandescent bulb - when visiting or living on such a planet, the eye would compensate, making the surface appear brighter and and 'whiter' than the star's light would otherwise suggest.

Krypton in the Comics

The history and culture of Krypton has been rewritten many times over the years. At the time of the writing of Lois & Clark the New Adventures of Superman the John Byrne reboot of the Superman franchise was well established.

The re-visioned Krypton was approximately the size of Earth and orbited a red sun called Rao which was about 50 light-years from Earth. (This was later placed in the Andromeda Galaxy but the ability of the New Kryptonians to reach Earth with relative ease in L&C would indicate that both Krypton and New Krypton are were both fairly close neighbors to Earth.) Over 100,000 years ago, Krypton had already developed scientific advancements far beyond those of present-day Earth, and had conquered disease, learned to retard the aging process, and perfected cloning - vast banks of non-sentient clones held multiple copies of each living Kryptonian so that replacement parts were always available in the case of injury. All Kryptonians were effectively immortal and eternally young, and enjoyed an idyllic, sensual existence in an Arcadian paradise.

However, the society was tipping towards decadence and eventually political strife resulted from the debate as to whether clones should have rights (sparked by the presence of an alien missionary known as the Cleric). Eventually this disagreement led to open violent conflict, during which Kryptonian science was turned to warfare and several super-weapons were developed and used. Among them were the devices which became known as the Eradicator and the Destroyer.

Although the Eradicator's effects (altering the DNA of all Kryptonian life-forms so that they would instantly die upon leaving the planet) were felt immediately, the Destroyer's effects were more significant over time: by the time the Kryptonian government admitted defeat and abolished the clone banks, a terrorist faction known as Black Zero had started the Destroyer, a doomsday device intended to trigger a massively explosive chain reaction in Krypton's core.

At the time, it was believed that the device had been stopped before it could achieve this, but eventually it was discovered (centuries later by Jor-El) that the reaction had only been slowed to a nearly imperceptible rate and would eventually destroy the planet as intended.

Although it had apparently survived the war, Krypton was deeply scarred. The lush garden world was burned and blasted, left mostly a lifeless desert. In direct contrast to the society that had existed prior to the Clone Wars, a sterile, emotionally dead civilization emerged. The population became isolated from one another, living in widely separated technological citadels and shunning all personal contact. Procreation became a matter of selecting compatible genetic material which would then be placed within an artificial womb called a "birthing matrix." Any attempt to contact other worlds was forbidden, and the planetary government maintained an isolationist stance, forbidding space exploration of any kind.

It was into this world that the famed scientist Jor-El was born. By his adult years, the mysterious "Green Plague" was killing Kryptonians by the hundreds, and upon researching the matter, Jor-El discovered that the cause was growing radiation produced by Krypton's increasingly unstable core. Due to this process, the planet itself was going to explode.

Unable to convince his associates to abandon tradition and consider escape, Jor-El took the birthing matrix of his unborn son Kal-El, removed the Eradicator's planetary binding, and attached a prototype interstellar propulsion system to the vessel. Just as the planet began to shake apart, he launched the matrix towards Earth, where it would open and give birth to the infant upon landing (The post-Crisis Superman therefore was technically "born" on Earth).

In this continuity, Superman also only became aware of his alien heritage sometime after his debut as a superhero, when a holographic program encoded into the craft which brought him to Earth uploaded the information into his brain.

Concerning the Planet of Krypton in Lois & Clark

The version of Krypton seen in Lois & Clark is obviously based, at least in part, on the Krypton in the Bryne reboot of the comic franchise. The planet exploded, not its sun. While much of Krypton's history is no doubt the same, certain elements are prominent in their absence, namely the DNA altering effects of the Eradicator. The Krypton portrayed in Lois & Clark was able to establish a colony, thus preserving some portions of their society.

Other notes: Superman is described as having a greater that human-normal molecular density. However, this density cannot be much greater than Earth-normal otherwise someone would have noticed early on that Clark Kent, even as a child, weighed far more than he should have. This would indicate that the surface gravity on Krypton was not too dissimilar to Earth's. Certainly the gravity of Krypton would be well within human capacity to tolerate.

Giving Krypton a surface gravity of 20% higher than Earth and a density 20% greater than Earth's (traditionally Krypton's core, instead of being iron/nickel was of heavier metals) gives Krypton a mean radius almost identical to Earth's.

Krypton's planetary system: Krypton was one of seven planets orbiting the star Rao. At the time of its destruction, Krypton had two moons: Koron and Mithen. The moon Xenon was spun out of its orbit and lost, while the inhabited moon of Wegthorn was destroyed by the scientist Jax-Ur. Remnants of this moon undoubtedly created a ring of debris orbiting the planet.

Krypton in the Movies

Kryptonians were portrayed as being a coolly cerebral society, clad in stark white, and treading halls under crystalline arches. The crystalline motif was employed not only in the architecture, but in the landscape and technology as well, suggesting that the entire planet had been adapted and altered by Kryptonian influence. Krypton itself was ultimately destroyed when its star began to collapse; the planet was pulled into the sun and ripped apart, then incinerated when the star went nova.

The film's Krypton was presented as having a society "better" than Earth's. For instance, there was no death penalty on Krypton because almost all criminals were rehabilitated (the ones that were not or were beyond rehabilitation such as General Zod were banished to the Phantom Zone). Superman himself thought very highly of the planet and was proud to have come from there. Also, in this version, both Jor-El and Lara are able to preserve some part of their essence in the starship that brings their child to Earth, so that on Clark Kent's eighteenth birthday, Jor-El appears to him within the Fortress of Solitude and initiates twelve years of Kryptonian education for the youth, and both remain as constructs within the Fortress until it is ransacked by Lex Luthor (in Superman Returns).

Superman's symbol is given a Kryptonian origin in the film. Kryptonians are shown wearing unique symbols on the chests of their robes, similar to a family crest; Jor-El and Kal-El after him wear the familiar S-shield.

However, for all their 'enlightened' ways, the governance of Krypton appeared to be by a committee made up of elders who were both short-sighted and over-bearing. When Jor-El attempted to argue his case on Krypton's impending doom he was warned not to tell anyone and when their surveillance equipment detected unauthorized energy use in Jor-El's laboratory, a security detachment was sent to arrest him.

The Colony of New Krypton
The Mythos of Superman Links