In Lois & Clark, Smallville is shown to be exactly what the name implies - a small, friendly mid-western town.

Smallville has always been portrayed as a small, isolated, idyllic Norman Rockwell-esque farming community and has been placed variously as being close to Metropolis, in Delaware, in Maryland, and in Pennsylvania. The Superman Movies and Elliot Maggin's Superman novels stated that Smallville was in Kansas. The writers at DC Comics have adopted this, giving Smallville a history consistent with Kansas. Smallville the series has placed the town near Wichita with Metropolis over by Dodge City and in east Kansas, depending on the whim of the writer. Scott Beatty puts Smallville near Lawrence, Kansas, just off of I70. In The Kents by Ostrander, Truman, Mandrake, and Bair; Smallville is stated as being on the Arkansas River. In the Wrath of Gog, by Austen, Reis and Campos; Smallville is also stated to have a population of over a hundred thousand. This version of Smallville most likely overlays the city of Hutchinson, Kansas.

In Tempus Fugitive, Miss Martha says Kansas City is four days away [120-160 miles]. (A horse with a rider and gear averages about 32 miles a day but could possibly go 40 if ridden hard with a light load.) The presence of Jesse and Frank James in Smallville in mid-May 1866 would lend weight to Smallville being in the eastern portion of Kansas. (The real James gang robbed a bank in February 1866 in Liberty, Missouri - a few days ride from Kansas City. Historically, they headed for Texas, but if Smallville was south or south-west of Kansas City...) 160 miles allows both Abilene, Kansas and Independence, Kansas to be within the given distance. 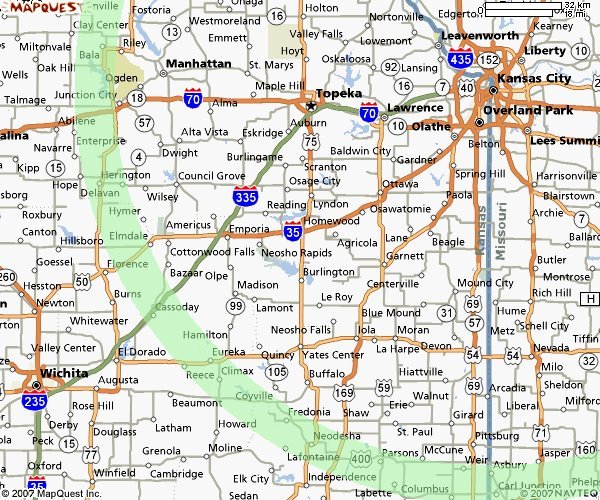 The inner portion of the green band is approximately 120 miles from Kansas City. 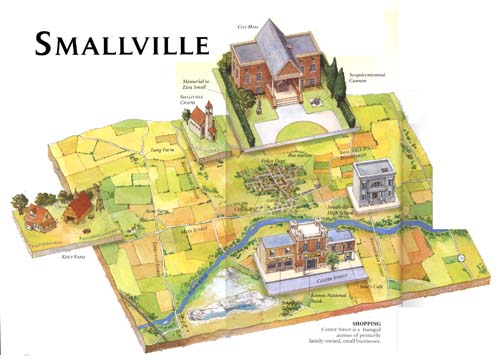 Click on the image for a larger picture.
From Superman: The Ultimate Guide to the Man of Steel (Hardcover) by Scott Beatty (Author)

A Brief History of the Town

According to DC Comics: the name Smallville comes not from its size, but that the town was founded on the banks of the Elbow River sometime in the 1840's by a trader named Ezra Small. The Kent family has been a presence in the area since just after the Civil War. Not just farmers, but law enforcement, newspaper publishing, even a bank robber.

In Tempus Fugitive, the local law enforcement officer in Smallville 1866 is named Kent.

In the series, Smallville is a very small town, well off the beaten track. (Unless Clark was pulling Lois's leg in Green Green Glow of Home and taking the looong way to town - in which case, what's that semi doing sitting behind them at the railroad crossing on the way into town?) 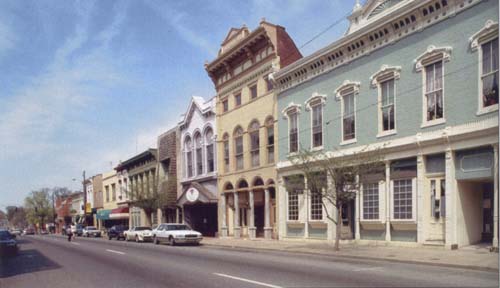 What we see of Smallville is based around a large town square (reminiscent of the traditional town squares of New England.) The focal point of the square is a large gazebo-band shell. Across the street from the square is the town hall (with a marble and granite marker) and shopping. Shopping includes a Hardware store (sign looks like it's an Ace hardware), Shaw's Malt Shop, an Italian Market, The Smallville Gourmet Market and Bakery, Revell & Holt (law firm), Lang Bros. Books, a florist and others. Given the age of the town, there is likely to be a Carnegie Library with 'Let There Be Light' inscribed above the doors within a block or two of the town hall.

Assuming a population of about 3,000 for the town proper, 4,000-25,000 for Lowell County (this is a larger population than Lois & Clark would indicate but appears to be average for a East Kansas county) - Smallville can be expected to have 13-15 churches of varying denominations. It will have a small hospital and medical center (35-40 beds), at least one adult assisted living facility, and a rehabilitation center (nursing home).

Clubs and organizations in the area will include the major service clubs such as Eagles, Elks, Lions, Odd Fellows, Masons, Rotary, and Grange. Being a small rural community, the Smallville Grange will have a strong membership. The Grange has a long history in rural areas and functions as an agricultural/rural political action group dealing with rural concerns (although the Grange does not endorse political candidates.) The Grange meeting building will also likely also be used by other groups. Smallville will have VFW, Scouts(Boy and Girl), 4-H, Boosters (possibly PTSA) and senior citizen clubs as well as other fraternities and sororities.

The school district will have approximately 1,000 students in three or four buildings. There will be 100-125 classified employees (teachers and staff). Based on a typical school district evolution: once the school population grew past the one-room schoolhouse phase, a building of good materials was built near the town center. As the school population grew and education expectations rose, a second building was built to house the older students (the high school). As population and sports interest increased, a separate high school with sports and community facilities was built on the outskirts of town. The old high school became the middle school and the original building remained the elementary. By the mid-sixties, one or two new elementary schools were built using the newest theories in school architecture. The original school building then became the offices of the school district, with other city departments sharing some of the space.

By the mid to late 1990s, the existing buildings would be in need major renovation - the old buildings would not have met ADA standards. In many school districts across the U.S. major school renovations and replacements took place in the mid to late 1990s into the present. Frequently, the original or oldest school building would end up on the National or State Register of Historic Buildings. Instead of being torn down it would go to the local historic society for a museum, be turned into a community center, or sold to a group which would convert the building into 'charming' retail space while maintaining its historic character.

Although Smallville may have a junior college, chances are good that the nearest four-year college or university is some distance away.

As of 1993 the sheriff of Lowell County was Rachel Harris, who beat out the previous sheriff, Fordman, on a modernization platform during the 1992 election. (She promised to get the county sheriff's department some computers.) The post of county sheriff is an elected one and the term is normally four years. We are not told the name of the town's police chief. In the general DC universe, Smallville's chief of police is Douglas Parker, who has served in the post for many years. In the real world, the sheriff's department and city police have different jurisdictions but will also be found working closely together. The sheriff's office would likely be in Smallville proper and economics would dictate that either the county or the city will have lock-up facilities that would be used by both. In Til Death Do Us Part, the Lowell County sheriff in 2000 is named Neusbaum and he had been in office 'for some time'.

Small towns have relatively little crime. (An area with a population in the thousands is not likely to have crimes that occur 1:100,000.) Statistically, Smallville can expect one murder a decade, a few robberies, and a few rapes. More prevalent will be traffic violations (with and without DUI), drunk & disorderly, domestic violence, animal and child neglect. The few car thefts will more than likely be joy-riding kids. For Smallville, the shooting death of Jason Trask at the Kent farm in 1993 would be a major traumatic event. The alien invasion of 1996 had the potential of destroying the town.

Nitpicker's Note: Give me a break - nobody in a town of only a couple thousand people noticed that Clark Kent's parents were being held hostage to guarantee the behavior of Kal-El? And Kal-El looks an awful lot like the Kents' boy, Clark, and Clark's big city girlfriend is hanging around him?

Smallville is the county seat of Lowell County. From Kansas District Courts: [District courts are created by the (Kansas) Constitution. They are the trial courts of Kansas, with general original jurisdiction over all civil and criminal cases, including divorce and domestic relations, damage suits, probate and administration of estates, guardianships, conservatorships, care of the mentally ill, juvenile matters, and small claims. It is here that the criminal and civil jury trials are held. Kansas is divided into judicial districts, with a varying number of judges in each district. There is a district court in each county and an office of the clerk of the court where cases may be filed.] Therefore, Smallville has a courthouse and a district judge. By Kansas law, a district court judge is also a lawyer.

The Lowell County Fair would be held annually sometime in July or August at the county fair grounds. The Corn Festival is held annually in mid to late September in the town square; other seasonal celebrations.

Nitpicker's Note: The southwest corner of Kansas grows more corn than any other section of the state. The eastern portion of the state grows the least, with the smallest amount grown in the southeast corner of the state. From the criteria set above, Smallville is most likely in the USDA's East-Central Kansas agricultural statistics district. Therefore, the Corn Festival is most likely an attempt by the local business and crafts people to get more tourist trade. 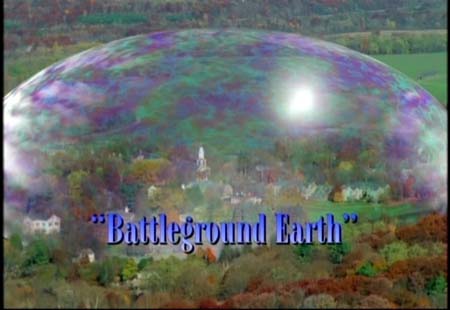 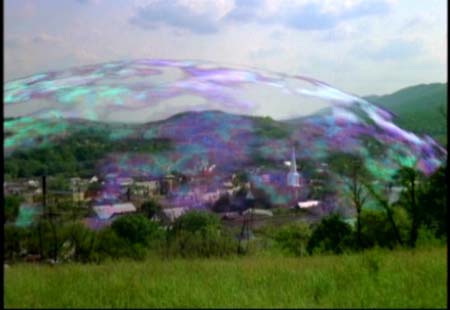 Smallville under an alien force dome (Battlefield Earth)
Click on the images above for a larger picture.

Nitpicker's Note: Above: Despite the state of Kansas' insistence that it is not miles and miles of miles and miles - those green lumps in the background in the right hand photo are what mid-westerners call mountains. Also missing from the views of Smallville in this episode - the grain elevators next to the railroad tracks. This storage facility would be several stories tall and would be visible from quite a distance. We won't even go into the fact that Smallville is a farming community and there are no barns that we can see near the houses outside the force dome. Frankly, what the photos show looks a lot more like Vermont than Kansas. 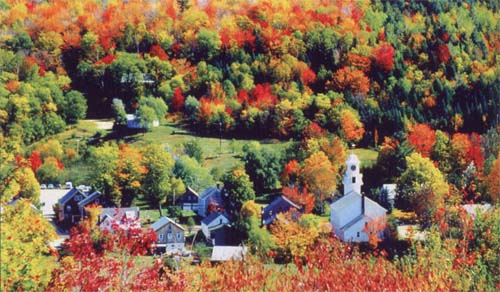 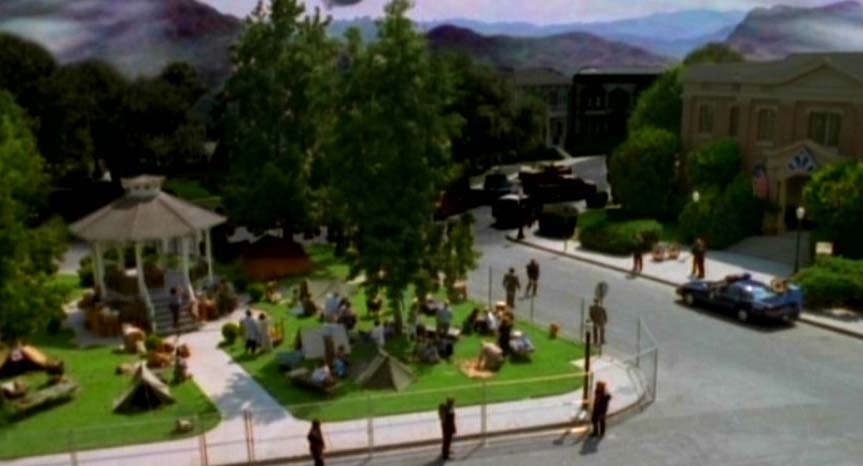 Again, those lumps in the background are what mid-westerners call 'mountains'.