New Krypton is unique to the Lois & Clark: the New Adventures of Superman universe. There is no precedent in DC comics. There the post-crisis* Krypton is described as aloof, insular and isolationist and no native of Krypton could leave the planet except under extraordinary circumstances. The pre-crisis* Krypton also had no known colonies. 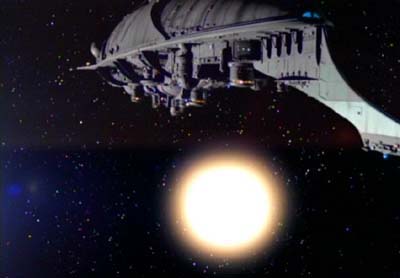 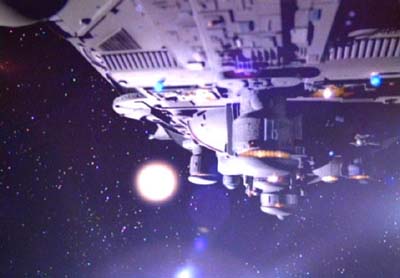 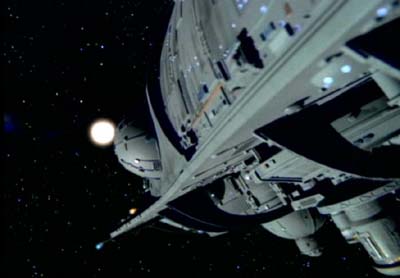 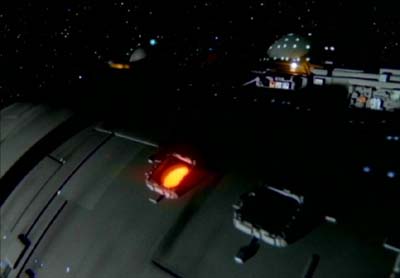 Arrival at the Mother Ship 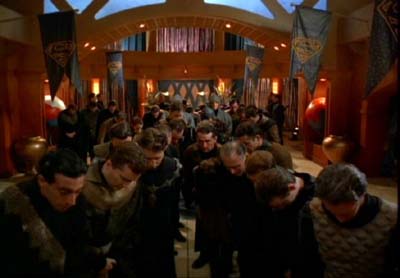 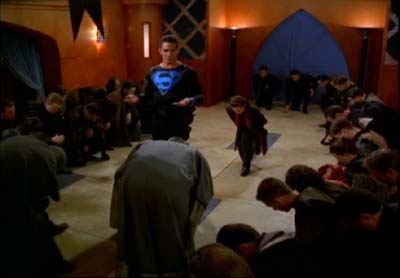 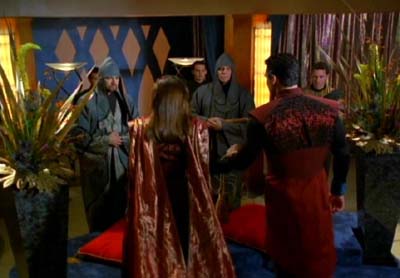 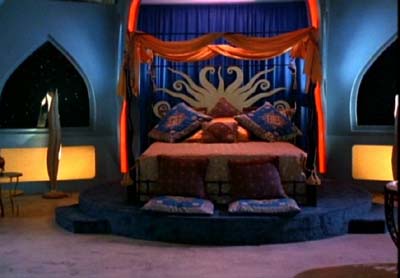 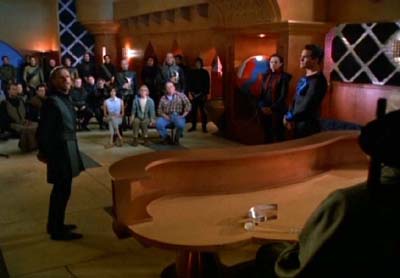 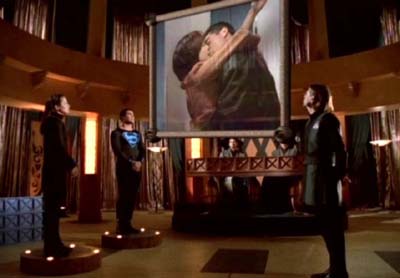 Inside the Mother Ship

We are told that when Krypton died a 'thousand or so' made it to safety. For some unknown reason Jor-El's son was sent to Earth instead of to the haven colony. We are also told that Krypton practiced infant marriage to bind alliances between the various controlling families (nobility) and this practice has been handed down to the colony.

Nitpickers Notes: a mere thousand individuals does not have enough genetic variation, or skill sets, to create a viable society. This, coupled with a stated history of violence, would doom the colony within a few generations, if not sooner. It must be assumed that the Kryptonians knew this and that the number Zara gives as the survivors does not in fact refer to the entire population. She may be speaking of only the nobility and not including the other members of a noble household (which could number in the hundreds); the thousand survivors made it to an already established colony with a high enough population; they brought with them the technology to increase their genetic variation through cloning or other means. (This last does not address the issue that there are not enough people to actually keep a viable colony running.)

The colony of New Krypton is barren and harsh. The colony is governed by alliances between powerful families and when those alliances break down chaos and violence ensues, up to and including civil war. Despite an apparently advanced level of technology and allegedly advanced culture, the New Kryptonian nobility practices concubinage and infant marriage and appears to be for the most part, above the rule of law - at least as far as law limiting their actions in regard to non-nobility or non-Kryptonians. (Nor murders a Kryptonian retainer in front of witnesses and the only reaction from the witnesses is to wonder if they made a mistake in trusting him.)

What we see in the episode Battleground Earth - out of an audience of about twenty, there are at most two Kryptonian females aside from Zara. Given that there should be an approximately equal number of males to females on the colony, that would imply that the colony is extremely male-centric. In Lord of the Flies, Kal-El is afforded the choice of a concubine in addition to his legal wife, which lends support to the idea that New Kryptonian society is extremely male-centric as does the notion that Zara cannot rule without the support of being married into a allied house. (Unlike Queen Elizabeth I, Zara has not made the claim that she is married to the colony and thus does not need a husband. This implies she feels she does not have the political support to succeed in that sort of bid and hopes Kal-El will be a charismatic enough leader that the other houses will support them against Nor's bids for rulership.)

What can be derived from the above? As with many older aristocratic societies, property and land holdings are everything. The crime of which Kal-El was convicted was not treason as in actively acting against the state by taking up arms against it or giving information to its enemies, but of refusing to sire a legitimate heir off his legal wife and ensuring a stable transfer of property and power in the future.

Nitpickers Notes: Reality 1: governments exist to a) provide services that cannot be afforded on an individual basis - military and/or police protection, roads, other largejoint ventures; b) create and apply laws, especially in regards to land and resources. While modern societies tend to emphasize b, historically, governments have stressed a: the need to support and/or raise a military force. (Most aristocracies have as their underlying premise a trade-off of land use for military support - lord or king 'owns' the land and grants use of it in trade for military service when required. The larger and more prosperous the land under control, the greater the army that can be raised.
Old Krypton was described as being cold and insular (according to DC comics) - it had little or no contact with outsiders and even the attempt to make contact with outsiders was suspect, if not actually illegal. In this scenario, Krypton had no need of a standing military, nor did it have a need to make war, especially after the devastation created by the past wars.

Given what we see, what would New Krypton be like? We don't know what Eugenie Ross-Leming & Brad Buckner had in mind other than introducing Kryptonian survivors to the mix and writing a story where Lois and Clark succeed against all odds, including a power-hungry madman and a prior marriage. There are too few details given to say what society the writers based their colony on. Here is my take on New Krypton:

The colony known as New Krypton was, prior to the destruction of Krypton, a reasonably successful industrial or mining colony although it was not completely self-sufficient. The population was between 50,000 and 100,000 persons. The planet was Earth/Krypton size and orbited around a red-dwarf. Being tide-locked added to the difficulties of living there. Shortly before the destruction of Krypton, the members of the ruling counsel evacuated their families, servants, and chosen employees to the pre-existing colony. For some unknown reason, the scientist Jor-El chose not to emigrate to the colony, but instead sent his child to Earth. Superman: the Movie establishes that the Council of Elders had twelve members.

The stress of suddenly being cut off from their home world and the sudden influx of more than a thousand refugees, many of whom were members of the aristocracy, caused the colony's existing social structure and government to collapse. Over the following years, the old Kryptonian oligarchs, with their servants and weapons, were able to establish a consensual government between the various re-established houses. Property rights became a major issue as the planet's natural resources, such as water and arable land, were scarce. Each house devolved into a fiefdom, trading resources and vying for territory with one another. This would occasionally devolve into armed conflict between the houses in question. The combined strength of El, Ra and their allies would normally work at ensuring a more peaceful solution.

While women were equal members of society on Old Krypton, the colony's need to enlarge itself through breeding has forced women into a 'protected' role. With very few exceptions, women capable of child-bearing will not be permitted to enter into dangerous or 'unseemly' occupations. Over time this 'protectiveness' would devolve into women becoming second-class citizens.

The houses of El and Ra were already conjoined while on Krypton and most of the other alliances were also set. We do not know if Jor-El was the head of the House of El. Given the above scenario, he may not have been, or he turned rulership of the house over to another relative, as the House needed to be an acting presence in the colony. However, Kal-El is known to be the legitimate heir to the House of El, no doubt following the death of the previous head of the house - an uncle or possibly grandfather.

* Post-crisis and pre-crisis refers to the 1986 rewrite of the Superman universe by John Byrne (Crisis on Infinite Earths). The 2005 mini-series Infinite Crisis does not apply here as Lois & Clark tNAoS occurred prior to that writing.