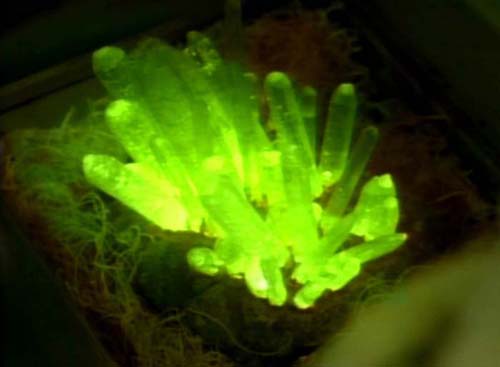 In the World of Lois & Clark, the rare crystal known as Kryptonite is piece of the late planet Krypton. It is element 126 (a stable transuranic element) created when:
a) Krypton's core was converted from iron-nickel (or possibly uranium) into kryptonite following either a natural or man-made disaster that eventually led to the explosive destruction of the planet when the core went critical, or,
b) the radiation of Krypton's red giant sun converted the crystalline crust of the planet into kryptonite when the sun went nova.
In either case, an unknown amount of the substance arrived on Earth along with the ship that brought baby Kal-El to Earth - presumably caught in the hyper-drive wake of the ship. Kryptonite has a crystalline structure similar to quartz and is fluorescent with a green glow.

There are two known forms of kryptonite:
Green: which emits radiation in a frequency that may or may not harm Earth-life but is known to severely effect Kryptonian life forms (Superman).
Red: an isotope which emits radiation on a slightly different frequency and appears to have varying effects on Kryptonians. It is unknown what effect red kryptonite has on humans aside from the ability - when used to create a laser beam - to transfer Kryptonian powers to other beings.

Red kryptonite has had the following effects on Superman:
1) affected his personality in a manner similar to alcohol. (He became lackadaisical and apathetic and his normal inhibitions appeared to be inhibited.)
2) caused him to either misjudge his strength and abilities or over charged him so he was no longer completely in control.
3) When used to create a laser, a red kryptonite beam has the ability to completely transfer Kryptonian superpowers over to another individual for an unknown length of time.

It is unknown as to why red kryptonite has varying effects but it can be speculated that there are variations in the strength and frequency of the radiation in the various crystals due to contaminants and possibly size of piece and length of exposure.

Green kryptonite is known to have extremely deleterious effects on Kryptonians. Momentary exposure to small amounts causes dizziness and weakness, but passes quickly when exposure ends. Longer exposure, or exposure to larger amounts, causes dizziness, weakness, nausea, muscle and joint pain and fever as well as causing loss of super powers, including invulnerability. The longer the exposure, or the larger the amount of kryptonite, the longer it takes for full recovery. In Green, Green Glow of Home, Clark is exposed momentarily to a good sized chunk and loses his powers for at least 12 hours as well as exhibiting a high fever for a short time. In House of Luthor, he is exposed kryptonite contaminated cell bars for at least eight hours but we are not given a time frame for his recovery. We do know that his powers have returned by the time the episode ends - which may have been several days later.

Nitpicker's Note: Elements can normally only be destroyed or changed via extraordinary means or by natural breakdown if radioactive. A radioactive element breaks down due to its inherent instability becoming something else. (Carbon-14 becomes Nitrogen-14, Uranium-238 becomes (after a lengthy process) Lead-206, and so on. A large mass of kryptonite is shown as being 'destroyed' after simply being thrown against a rock. However kryptonite is also shown in various episodes as being ground into powder and cut into bullets. 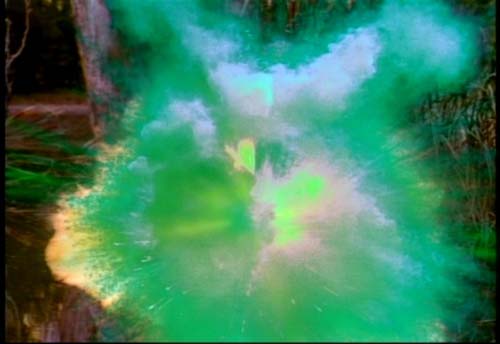 While kryptonite may be fissile (able to divide its nucleus in the manner of Plutonium or Uranium-238), it is extremely unlikely it would do so with only being hit by a rock. And if it was fissile, the resultant explosion should have been at least equal to that of a nuclear explosion using more standard materials.

I suspect it is a fair assumption that the kryptonite that was thrown against the rock in Green, Green Glow of Home was not in fact destroyed but shattered into pieces small enough to make recovery difficult if not impossible. The kryptonite was then lost to the air and the water, with the larger pieces going to the bottom of the pond. It is also possible that the pond water was contaminated with lead, shielding Clark from its effects. Clark was the only person who knew the fate of the crystals and had seen them vaporise. He assumed since he no longer felt the effects, the crystals were destroyed. 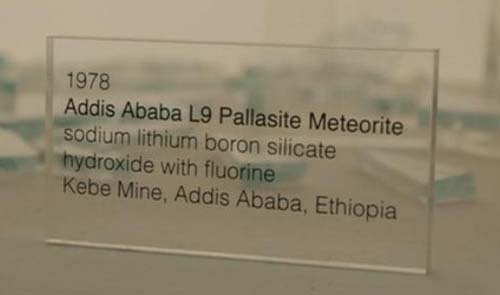 Placard from the Metropolis Museum of Natural History (Superman Returns)

Given that kryptonite has been established to be a transuranic element and the placard does not list any 'unknown' elements as part of the meteorite the placard describes, it can only be assumed that the sample used for the analysis was from the surface of the meteorite and did not include any of the crystalline interior mass. It can also be assumed that the sodium lithium boron silicate hydroxide with fluorine is a sample of Krypton's mantle.

The Mythos of Superman Links